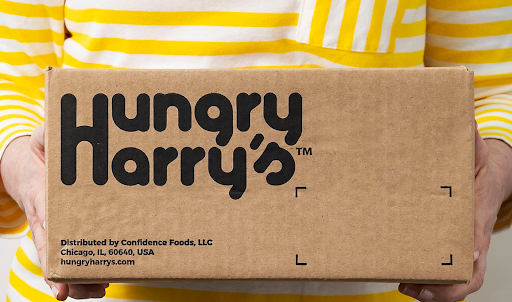 Hungry Harry’s is on a mission to create great-tasting food that is free from the 14 food groups accounting for nearly 90% of all food allergies. Their entire line of baking mixes is made from simple ingredients in a dedicated facility to completely eliminate concerns about cross-contact, and their website boasts a full catalogue of allergy-friendly recipes to empower families to share in the joy of baking and eating together without having to worry about the safety of allergy-sufferers in their home.

Through their upbeat messaging and social media marketing efforts they’ve gained a large and loyal following of allergy families and built a sense of community around their brand in the span of only 13 months. With major supermarket negotiations on the horizon and consistently increasing month over month direct to consumer shipments, they’re approaching an imminent period of rapid growth with measured confidence. The Hungry Harry’s team had every intention of becoming a household name from the outset and knew that building partnerships that could equip them to compete and scale would be key to achieving that goal.

A Startup Poised for a Meteoric Rise

Co-founders Sarah and Rob knew from the start that by creating allergy-friendly foods that were undeniably delicious, even by mainstream standards, they were bringing something very special to the market. This key differentiator meant that Hungry Harry’s would not only empower allergy children to participate in the social aspects of cooking and eating but would also open up their product line to an entirely new market segment for an allergy-friendly brand. This expanded addressable market paired with the 32 million people in the US who manage life threatening  food allergies, and an additional 89 million impacted by allergies in some way meant that Hungry Harry’s would need to be prepared for rapid growth with the agility to grow across multiple sales channels before they went to market.

Sarah’s experience in building an online community for brands gave her the confidence to go out on a limb and first launch their product with a direct to consumer eCommerce approach, a new but growing frontier in the food and beverage industry. The response to their online store confirmed Sarah’s suspicions that Hungry Harry’s was poised for exponential growth — with 35% of customers making a repeat purchase within the same month, compared to the industry standard of 25% repeat business within the first year of initial purchase.

Even with the success of their eCommerce business, Sarah and Rob knew that supermarkets would still be an integral part of a successful growth plan for Hungry Harry’s. They knew that their business model as well as their supply chain and logistics models would need to support not only their growing eCommerce customer base but also their future supermarket partnerships that would require regular shipments to thousands of stores nationwide. They had already found a supplier with the manufacturing capabilities to scale up with them quickly, but they were missing a very key piece of the puzzle.

A Partnership at Scale

Their main challenge was finding a logistics provider that could accommodate their growing B2C shipments while simultaneously standing up to their B2B demands. Finding a provider that could also accommodate their rapid growth, while lowering freight costs and improving delivery times was of equal importance and proved infinitely more difficult. In time they turned to their long-standing shipping partner, UPS, and found their perfect strategic match with Ware2Go.

They immediately felt comfortable in their partnership with Ware2Go, finding much needed support along each step of the onboarding process. While other partners might throw a pile of rote documentation their way to explain their platform and procedures, Ware2Go offered personalized insights and instruction through multiple phone calls and meetings.

The most important difference in their relationship with Ware2Go was that Hungry Harry’s had found a flexible partner that could fulfill their current direct to consumer small parcel orders but would also be able to ship full pallets or even truckloads and help them meet retail compliance when the time came. This gave them confidence to pursue their retail and distribution partnerships and the time to focus on growing their business, knowing that their supply chain would take care of itself and would be ready to scale at a moment’s notice.

In Ware2Go they had found a like-minded and equally ambitious partner that met them where they were but supported them in their long-term goals. Their dedicated team of logistics experts is not only concerned with the day-to-day of managing Hungry Harry’s warehouse partnerships and shipping metrics, but is also looking ahead and identifying possible growth issues in the future. Rob and the logistics team feel that they are able to rely on the expertise of their Customer Success Representatives at Ware2Go and really lean into their growth potential with confidence.

Capitalizing on a Scalable Partnership

As Hungry Harry’s continues to grow its online presence and eCommerce sales, their plans for expanding into major supermarket chains are also coming to fruition. They feel confident now that all of the pieces are in place from manufacturing to placing products on the shelves, and they’re poised for the rapid growth they’ve expected from the beginning. As their team negotiates major distribution deals, Ware2Go will continue to support both the eCommerce shipments that were the foundations of their business and the large retail shipments that will make Hungry Harry’s a supermarket staple and household name.